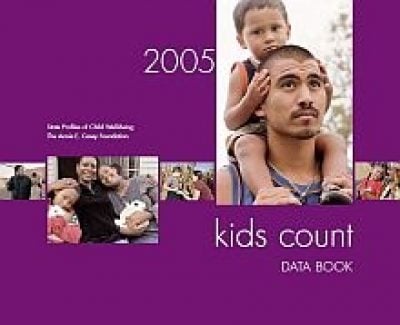 The KIDS COUNT Data Book is an annual publication that assesses child well-being nationally and across the 50 states. The 2005 report begins with an essay, "Helping Our Most Vulnerable Families Overcome Barriers to Work and Achieve Financial Success," which explores in-depth four factors that contribute to persistent unemployment among parents: substance abuse, domestic violence, a history of incarceration, and depression. Too often, adults face more than one of these barriers simultaneously, yet programs and services -- and their funding streams -- typically address them in isolation. The essay provides research findings about how each of the barriers impacts parental employment along with examples of innovative programs across the country that help parents overcome drug abuse, domestic violence, prior incarceration and depression and to transition to the workforce. It concludes that the most successful interventions are integrated, ﬂexible, and comprehensive in their scope.

The remainder of the report provides national and state data on 10 indicators that reflect a range of factors affecting child well-being, particularly health, adequacy of income, and educational attainment. Based on a composite index of the 10 indicators, the three highest ranked states for overall child-being were New Hampshire, Vermont and Minnesota; the three lowest ranked states were Mississippi, Louisiana and Alabama. The 2005 Data Book incorporates numerous improvements (including changes in some variables and data sources) in comparison to previous editions.

Differences between the highest and lowest ranked states are stark. For example, in 2003 New Hampshire's child poverty rate was 8% compared to 30% in Louisiana, and 23% percent of Nebraska children lived in families where no parent had full-time, year-round employment compared to 41% of children in Mississippi.

States in the South and Southwest dominated the lower part of the ranking. The 14 states with the lowest rank on child well-being are located in one of those two regions.

This essay examines 'four important, but still widely unaddressed, obstacles facing parents who are disconnected from America’s workforce: substance abuse, domestic violence, prior incarceration, and depression. These issues, individually and in combination, prevent too many parents from providing their kids with the economic stability they need to thrive and succeed.'

Successful programs demonstrate that no matter what barrier(s) a poor, out-of-work parent is facing, the best solution is to build a system of comprehensive, ﬂexible, work-based supports to help that person connect to the workforce.

We can and must ﬁnish the work begun under welfare reform and make good on the promise of helping all of those who want to work—even those facing the most formidable barriers—connect to a job, become self-sufﬁcient, and ﬁnd a path out of poverty. Almost 4 million kids are depending on us.