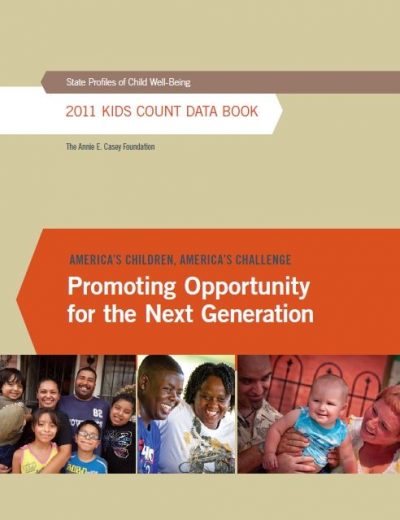 The KIDS COUNT Data Book is an annual publication that assesses child well-being nationally and across the 50 states. The 2011 report begins with an essay, “America's Children, America's Challenge: Promoting Opportunity for the Next Generation," which describes the recession's effects on children. Highlighting the risks the crisis poses for the next generation and our nation's future, the essay forcefully argues for a two-generation policy approach that both helps parents put their families on a path to economic success and enhances children’s social, emotional, cognitive and physical development from birth.

The remainder of the report provides national and state data on 10 indicators that reflect a range of factors affecting child well-being, particularly health, adequacy of income, and educational attainment. Based on a composite index of the 10 indicators, the 3 highest ranked states for child-being overall were New Hampshire, Minnesota and Massachusetts; the 3 lowest ranked states were Mississippi, Louisiana and Alabama. At the national level, overall child well-being stagnated since 2000 after improving in the late 1990s.

Promoting opportunity for the next generation

Almost 11% of our nation’s children had at least one unemployed parent in 2010, affecting nearly 8 million children. This number more than doubled between 2007 and 2010.

An estimated 5.3 million children were affected by foreclosure between 2007 and 2010.

The recession exacerbated racial and ethnic disparities in income and wealth, which were already deep before the crisis.

States in the South (both Southeast and Southwest) and Appalachia dominate the lower part of the ranking. The 10 states with the lowest Overall Rank in terms of child well-being are all located in these regions.

While there are differing opinions about how to solve our nation’s fiscal problems, few would disagree that strengthening our economy and reducing America’s debt for the long term cannot happen without adequate investment in the education, health, and social well-being of our children. Nobel Laureate James Heckman argues that achieving better outcomes for children is the single most effective way to create greater productivity and prosperity.

The Casey Foundation believes that providing the opportunity for all children to succeed requires two-generation strategies that simultaneously help parents put their families on a path to economic success and enhance children’s social, emotional, cognitive, and physical development from birth. Reducing the amount of time children are exposed to economic hardship and investing in their early childhood and early elementary years can provide children with a foundation for later success, including high school graduation, post-secondary education and training, and a successful transition to adulthood.