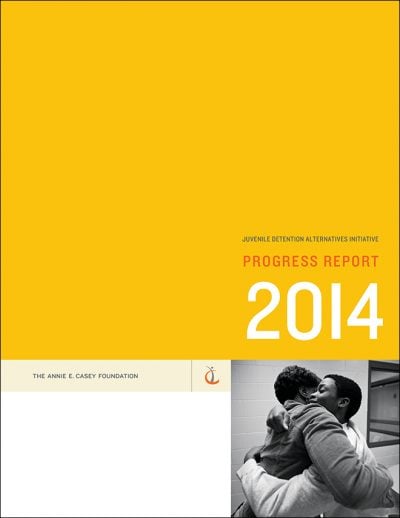 This report provides a detailed update on the Juvenile Detention Alternatives Initiative's progress since 2009. The number of jurisdictions adopting the model has continued to climb year-after-year, and state governments are taking an increasingly central role in supporting effective JDAI replication. Participating sites continue to report impressive results in reducing reliance on detention of court-involved youth awaiting court hearings or pending placement to correctional programs, and are doing so while protecting public safety and safeguarding taxpayer dollars. Meanwhile, the Foundation has launched an effort that will expand JDAI beyond the detention phase of the juvenile court process to focus on reducing reliance on incarceration in longer-term juvenile corrections facilities.

JDAI Continues to Grow and Expand

By 2012, JDAI jurisdictions had achieved a cumulative reduction of 43% in average daily population, according to available data. Of the 112 sites reporting, 68 reduced the daily detention population by one third at least, and 38 saw reductions of at least 50%.

Reducing Detention for Youth of Color

Overall, the average daily population of youth of color has fallen by 40% across all JDAI sites nationwide, nearly the same decline seen for white youth, even though youth of color have risen significantly as a share of the total youth population.

A 43% Drop in Commitments to State Custody

Jurisdictions participating in JDAI have seen a steep decline in the number of youth they commit to state juvenile correctional facilities. Overall, 94 of the 112 sites reporting data have reduced commitments.

Even after 20 years, the Juvenile Detention Alternatives Initiative continues to grow and expand, reaching an ever-larger swath of the U.S. youth population. Participating sites continue to reduce their detention populations and to intensify their work on combating racial and ethnic disparities, improving conditions of confinement, reducing the number of young people locked in detention due to rule violations and expanding and improving their detention alternatives programming.

While the Foundation cannot report an overall reduction in racial and ethnic disparities…the initiative is playing a pivotal role in mobilizing local leadership to take on the Disproportionate Minority Confinement challenge, and JDAI has emerged as an important laboratory for exploring new techniques and strategies to combat disproportionate treatment of minority youth in the justice system.