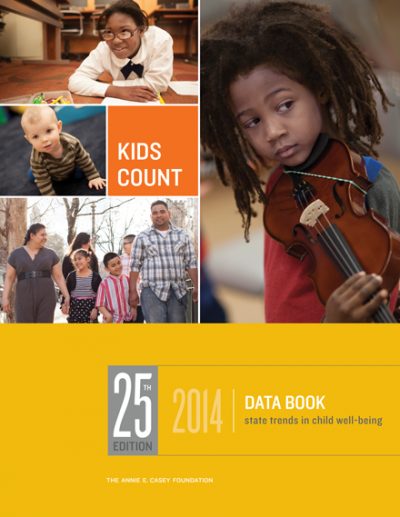 The Annie E. Casey Foundation’s 2014 KIDS COUNT® Data Book marks 25 years of sharing national and state-level data on the well-being of children. This edition focuses on two major areas: 1) data from 1990 — when the Foundation published its first Data Book — that show the major trends in child well-being; and 2) data from 2005 to 2012 that spotlight more recent trends and state rankings.

The look back to 1990 reveals some positive news: Young kids today are more likely to attend preschool, students are more likely to score proficient in reading and math, and both the teen birth rate and child death rate have dropped. Yet, the trends aren’t all positive. The nation’s child poverty rate has increased, and a higher proportion of kids are growing up in single-parent families and in areas of concentrated poverty.

The review of recent trends compares data from 2005 to 2012 — before and after the economic crisis. During this period, every indicator in the health and education domains improved, half of the family and community indicators moved in the right direction and no economic well-being indicators improved (three indicators worsened and the final indicator — the percentage of teens not working or in school — remained unchanged at 8%).

At the state level, the 2014 Data Book ranks Massachusetts no. 1 in overall child well-being, followed by Vermont and Iowa. Mississippi earned the last spot on the list, with New Mexico and Nevada rounding out the bottom three.

View the national fact sheet (also available in Spanish) or download your state's fact sheet as a PDF below: