A Guide to Housing Related Opportunities for Making Connections Communities 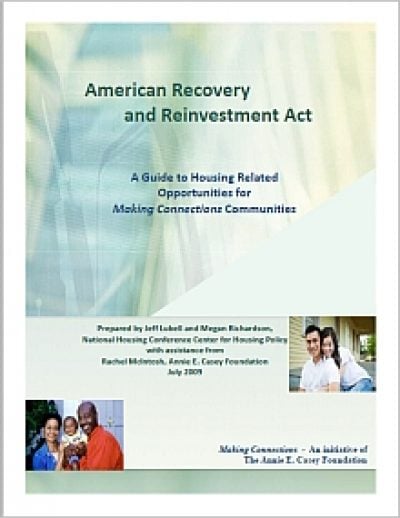 This guide outlines how Making Connections communities, at the time of this report, could structure inquiries to government entities to access the American Recovery and Reinvestment Act (ARRA) funding. The funding would build on the work already in progress through Making Connections. The guide also details how Making Connections policy and strategy work can help cities and states vie for the funds along with what funding is available by type and distribution.

Established in 2009, ARRA is the broadest and largest funding package in American History.

The $789 billion in funding for both programmatic spending and tax
credits were intended to spur economic growth and create nearly 3.5 million jobs.

Nearly $14 billion of the ARRA funding is alocated for programs in the
Department of Housing and Urban Development (HUD).

Communities must act now and act fast to get a seat at the funding priority table.

Used wisely, the resources provided through the American Recovery and Reinvestment Act cancontribute to and build on the work that Making Connections and other communities are doing toachieve and sustain more equitable results for families living in low income neighborhoods.

As noted, organizations interested in applying for funding will in some cases need to apply directly to the federal government, but in other cases apply to the states and localities that received the initial allocations.