A Path Forward for Camden 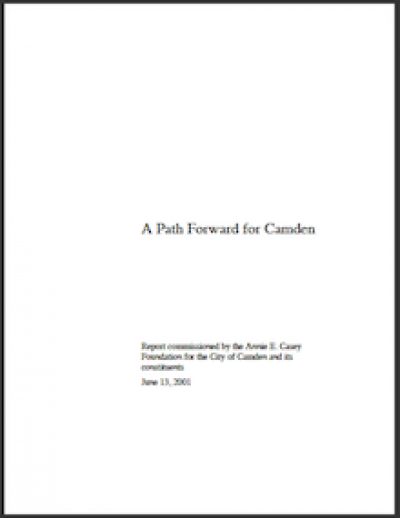 This report examines the current state of Camden, New Jersey at the time of this report (dismal) and the story of its downfall (starring a loss of middle-income residents and manufacturing jobs). Readers will learn about the past, present and future of Camden in three comprehensive chapters. Chapter one describes the city’s current condition and challenges. Chapter two revisits the reasons for Camden’s downfall. And chapter three looks ahead to tell what the city’s challenging, but doable, turnaround might look like. In its final pages, the publication spells out must-have components of the city’s turnaround plan and identifies next steps for jumpstarting the recovery process. Camden was one of 22 sites that participated in the Annie E. Casey Foundation’s Making Connections initiative during the 1990's.

Any potential plan to aid Camden must have a broad regional scope, long-term focus, comprehensive approach and the capacity to look beyond the symptoms to address root causes.

Camden’s roadmap to recovery must aim for four key outcomes: 1) eliminate the structural deficit; 2) support the inflow of private capital; 3) use public funds to rebuild physical infrastructure and human capital; and 4) strengthen the local government.

A Critical Next Step

Residents must assume ownership of Camden’s recovery. This means playing an active role in neighborhood organizations, holding elected and community leaders accountable, monitoring outcomes, and partnering with other stakeholders.

Camden has one full-service grocery store, one skating rink, no movie theaters and virtually no mainstream financial services institutions. Yet, the city is home to roughly 200 liquor stores.

Residents must — for their own sake and for the city’s — play an active role in developing the plan and making it a reality.