A Profile of Disconnected Young Adults in 2010

By the Annie E. Casey Foundation, the National Center for Children in Poverty 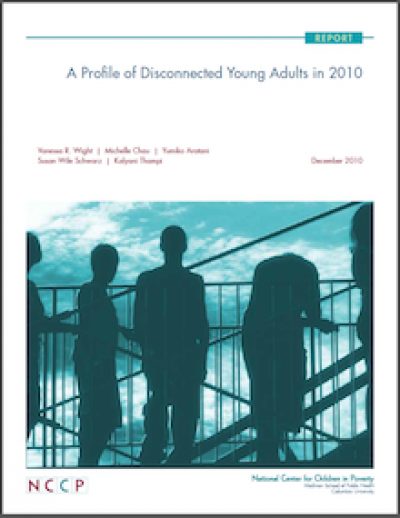 In 16 fact-packed pages, this report rings the alarm on a growing demographic: young adults who have fallen off the road to economic independence. Readers will learn how this group compares to their self-sufficient counterparts, the lasting consequences of missing the adulthood mark, and specific strategies for helping these wayward individuals get their lives — and futures — back on track.

Disconnected young adults — as defined in this report — are absent from the typical paths to economic independence, and their highest level of academic achievement is a high-school diploma. They are not employed, they are not enrolled in higher education and they are not enlisted in military service.

Compared to their connected counterparts, disconnected young adults are more likely to be married, lack health insurance and receive some kind of public assistance. They are also more than twice as likely to live in poverty, have a child and be a single parent.

Reducing the rate of disconnection requires a two-pronged focus, according to experts: 1) work to keep youth on a path toward self-sufficiency; and 2) help young adults who have already veered off track return to a trajectory of economic independence.

Readers will learn about potential ways to help disconnected individuals get their lives back on track. One option is to push to improve the quality of services, counseling and academic support offered at community colleges and other two-year institutions.

The average disconnected young adult is 21 years old and has, at most, a high-school diploma. Men and women experience disconnection at similar rates, with nearly 15% of each gender group impacted. In addition, the incidence of disconnection is higher among foreign-born individuals and all minority groups except Asians.

One in seven young adults is emerging from adolescence disconnected from any pathway leading to financial and economic independence in adulthood.