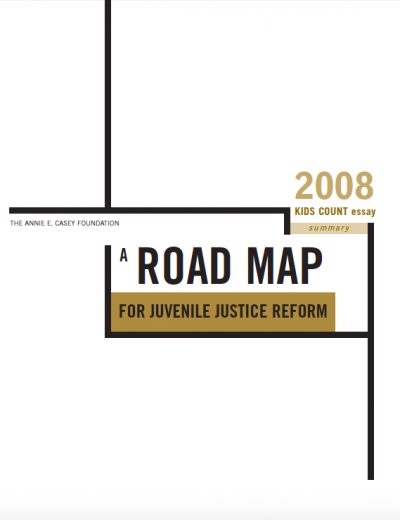 This report from a KIDS COUNT essay summarizes six key challenges for reforming the juvenile justice system in the U.S. for the benefit of youth, families and communities. Using case studies from states across the U.S., the report highlights strategies for success in reducing youth incarceration and recidivism. Information from this report was originally presented in the introductory essay for the 2008 KIDS COUNT Data Book.

Fewer than 25% of youth held in juvenile correctional facilities were charged with violent felonies.

California dramatically reduced both its rate of youth incarceration and violent juvenile crime.

Regardless of the nature of the original crime, 50% to 80% of incarcerated youth are rearrested within 2-3 years of release.

African American youth are incarcerated at a dramatically higher rate than white youth, regardless of the type of crime.

The good news is that over the past 20 years, scholars, advocates, and juvenile justice practitioners have compiled powerful new evidence on what works in responding to delinquency. Promising reforms are now underway and expanding in many jurisdictions, and the groundwork for deeper and more systemic change has been firmly established.

Though the reforms suggested here are ambitious and complex, they need not be costly. By redeploying existing resources in favor of more efficient, effective strategies, many JDAI sites have implemented reforms without increasing budgets—often achieving savings. Success in juvenile justice reform also requires strengthening efforts to recruit, train, and retain a qualified, motivated workforce.