A Snapshot of Children Living on Mexico’s Northern Border 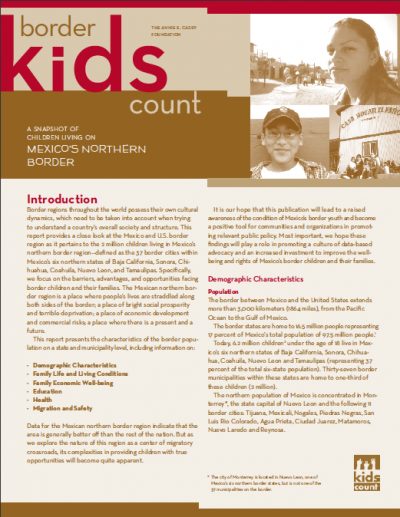 This report — part of the KIDS COUNT Snapshot series — takes a quick look at what life is like for the 2 million children living in Mexico’s northern border region. It shares statistics on child well-being measures in a range of areas, including migration and safety, living conditions, family economic well-being, education, health and more. The goal? Jumpstart data-driven discussions and informed decision making to promote well-being within these unique communities.

The northern border states are home to 16.5 million people — 17% of Mexico’s total population.

The northern Mexican border is host to one of the largest migratory flows in the world — approximately 310 million crossings annually.

Throughout Mexico, 49% of kids lack running water at home compared to just 29% of kids in the country’s northern border states.

More than 40,000 youth between the ages of 15 and 19 attempt to cross the border each year without legal documents.

Sexual and commercial exploitation of border children remains a dangerous yet undocumented reality.

Collectively, Mexico’s border states have one of the highest levels of literacy in the country.

Generally, women in the border states first become mothers at a younger age than those living elsewhere in Mexico.