A Work in Progress

By ABT Associates, Inc., The Annie E. Casey Foundation, 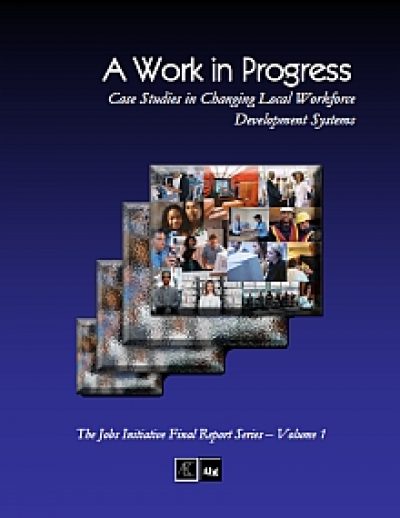 Federal welfare reform legislation and the Workforce Investment Act (WIA) brought a sense of urgency to helping lots of disadvantaged workers succeed in getting jobs.

Once a JI site identified a superior practice that improved employment and earnings outcomes for disadvantaged workers, its mandate was to find ways to promote the adoption of the better practices system-wide.

In Seattle and elsewhere, many community colleges viewed themselves as feeders to four-year colleges, not places for short-term vocational training for inner city job seekers. Policy, practice and culture had to be changed to move forward.

The Wisconsin Regional Training Partnership implemented a wide range of “quality employment practices” that promoted the mutual interests of employers and workers.

The Metropolitan Education and Training Center (the MET Center) in St Louis wanted to model an integrated, one-stop employment and training center. Putting this into practice proved harder than expected.

The Philladelphia Jobs Initiative (PJI) used data to increase accountability and influence the political system as the newly elected Governor embraced the approach by signaling a strong commitment to implementing the workforce agenda.

Nonetheless, if the cases are any evidence, it appears that it is possible for local organizations or intermediaries to lead intentional efforts that result in system changes.

The case studies are noteworthy in the variety of approaches used to promote the system changes highlighted. The cases reflect a number of different ways in which system change can be fostered.