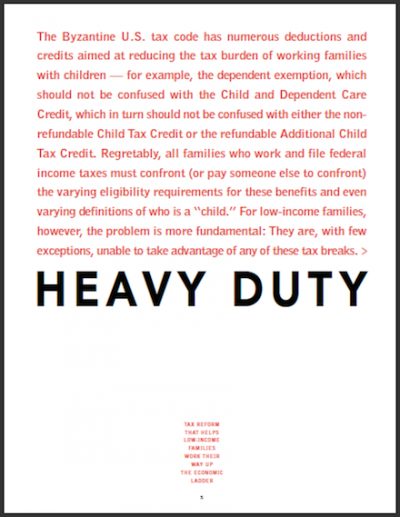 This issue of AdvoCasey examines options for providing tax breaks to those who need them most — poor and near-poor working families. Readers will also learn about critical housing needs nationwide and specific state-based efforts to connect residents to health care and better child care options.

AdvoCasey is a seasonal Casey newsletter with themed issues that spotlight programs and policies making measurable differences in the lives of kids and families.

Targeting poor and near-poor families, the Earned Income Tax Credit, EITC, is a tax benefit that increases the net income of low-wage workers.

The Internal Revenue Service’s publication explaining the EITC to taxpayers is 56 pages long.

At a Breaking Point

Despite its emphasis on encouraging work, the EITC does not always provide the largest rewards to low-income people who work the most.

Housing is emerging as a critical battleground in efforts to meet the needs of America’s most vulnerable children and their families.