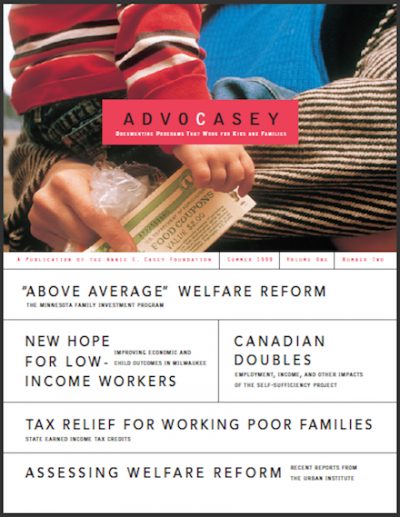 This edition of AdvoCasey examines the ripple of changes sparked by the landmark federal welfare law of 1996. Readers will learn about an array of financial incentive programs — in both the United States and Canada — that are helping welfare recipients secure work and bigger paychecks. A smaller story reviews one of America’s most effective anti-poverty programs, the Earned Income Tax Credit.

AdvoCasey is a seasonal publication with themed issues that spotlight programs and policies making measurable differences in the lives of kids and families.

Among long-term welfare recipients in rural areas, MFIP failed to generate lasting positive gains in either employment or earnings.

Welfare rolls nationwide are at their lowest level since 1969. The number of recipients has fallen 49% since 1994, according to the U.S. Department of Health and Human Services.

A Boost Among Boys

There is growing evidence that such financial incentives really can deliver on their hoped for goals of stimulating work effort, reducing poverty and enhancing family well-being.

The New Hope Project made a straightforward offer to all poor adults living in two distressed neighborhoods: If you are willing to work full time, we will help you lift yourself out of poverty.