Double Jeopardy: AdvoCasey Explores the High Cost of Being Poor 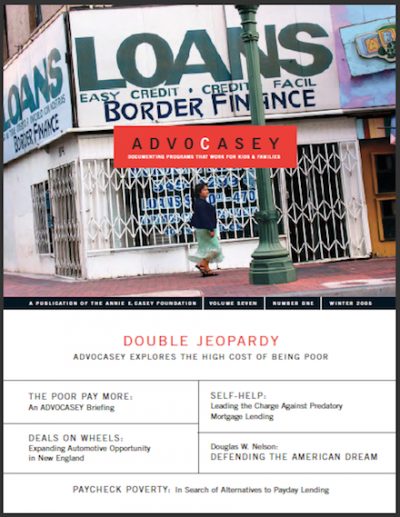 This edition of AdvoCasey documents the high cost of being poor in eye-opening detail — including the immense cost of credit paid by many low-income families.
AdvoCasey is a seasonal publication with themed issues that spotlight programs and policies making measurable differences in the lives of kids and families.

Payday lending locations are now twice as common as McDonald’s restaurants, with an estimated 22,000 outlets nationwide.

Public transit serves less than 5% of roadways nationwide. Yet, nearly one in four families earning $25,000 or less lack a car.

Compared to the typical suburban family, residents of low-income urban and rural communities pay 20% more, on average, for a basket of groceries.

In America, 73% of black kids and 40% of white kids live in households with no or negative net worth.

When you look at the budgets of America’s less-affluent families, one item stands out: the enormous amount spent on fees, interest, finance charges and penalties — in short, on nothing at all.

America is in the midst of a bankruptcy bonanza. From 1994 to 2003, the number of personal bankruptcies nationwide more than doubled to 1.6 million per year.