An Analysis of Racial/Ethnic Disproportionality & Disparity at the National, State, and County Level

By the Annie E. Casey Foundation and Center for the Study of Social Policy 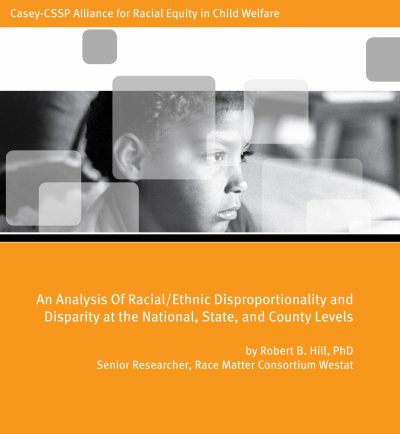 The brief shows the efforts of the Casey-CSSP Alliance for Racial Equity in Child Welfare to reduce disparities and the disproportionate number of children and youth of color in the custody of child welfare agencies.

Asian/Pacific Islanders are the least likely to be involved in the child welfare system.

A key measure in this study is the disproportionality rate, which is derived by dividing the percentage of children in a racial/ethnic group at a specific decision-making stage (e.g., investigation, substantiation, foster care placement) in the child welfare system by the percentage of children in that same racial/ethnic group in the census population.

Interestingly, children of all racial and ethnic groups, except white children, have increasing percentages of representation at progressive stages, whereas the proportion of white children decreases as they advance farther into the decision-making stages of the child welfare system.