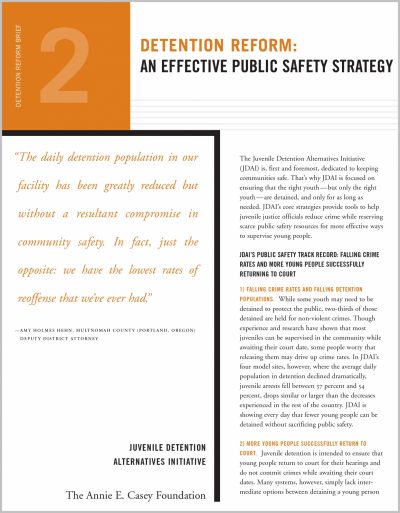 This report gives insight into the success of detention alternatives when dealing with youth arrests. The Foundation's Juvenile Detention Alternatives Initiative (JDAI) increases the options available for arrested youth, which helps to reduce incidents of crime and increase the rates of offenders returning to court without further incidents, hence making the community safer.

In Cook County, Illinois, kids staying out of trouble in the court system increased from 40% to 87% after implementing JDAI strategies.

Alternatives to juvenile lock up were shown to reduce relapses into criminal behavior and repeat offenders.

Detention actually may prolong delinquency and increase chances of re-offending.

A decline in detention rates corresponded with a 37% to 53% decrease in juvenile arrests.

Detaining more young people does not necessarily make communities safer. If we unnecessarily detain younger and less-experienced offenders, we’re exposing them to other juvenile offenders who are fully engaged in criminal life

The daily detention population in our facility has been greatly reduced but without a resultant compromise in community safety. In fact, just the opposite: We have the lowest rates of reoffense that we’ve ever had.