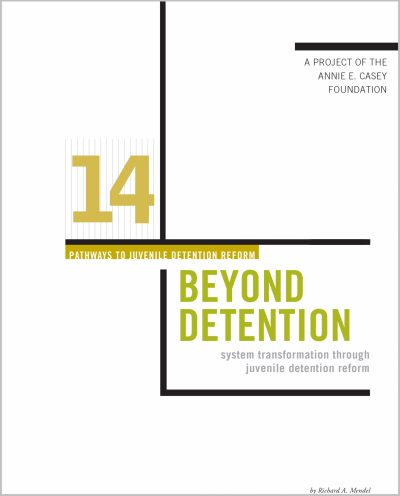 This report, the 14th installment in the Pathways to Juvenile Detention Reform series, features three sites that created a kinder, fairer detention system for America’s troubled youth. Readers will learn how these jurisdictions — hot on the heels of reform success — rallied their freshly-sharpened toolkits and reenergized spirits to focus on a new task: Transforming the entire juvenile justice system. And guess what? The leap to a larger stage paid off.

Some key findings, courtesy of JDAI

This report covers 18 examples of innovative nondetention programming in action. Readers can see what solutions each site tried and garner plenty of inspiration for tackling expanded reform efforts in their own jurisdictions.

Three ways (of many) that our juvenile court systems and corrections programs are failing today’s youth include: 1) relying too heavily on costly, ineffective out-of-home placements; 2) ignoring research and results; and 3) treating children of color more harshly than their white counterparts.

In response to a persistent problem — juveniles showing up in court without family support — California’s Santa Cruz County turned to its parents for guidance. Their input led the county to create a video outlining how parents can get involved in their child’s court proceedings. Parental feedback also helped officials create new educational pamphlets on drug use, relapse and treatment and launch a program called Family Partners that employed parents of children who had already navigated the justice system.

As a result of their experience with detention reform, JDAI model sites are making better — smarter, fairer and more effective — decisions at points throughout the juvenile justice system.

Why is it important to pursue juvenile justice reforms in areas other than detention? Because, quite simply, America’s juvenile courts and corrections systems are deeply troubled.

In the model JDAI sites of Cook, Multnomah, and Santa Cruz counties, reform efforts have not ended at the detention center door.

JDAI awakened in all the sites an awareness of the value community-based organizations can add to the juvenile justice system.