By the Leadership Center at Morehouse College 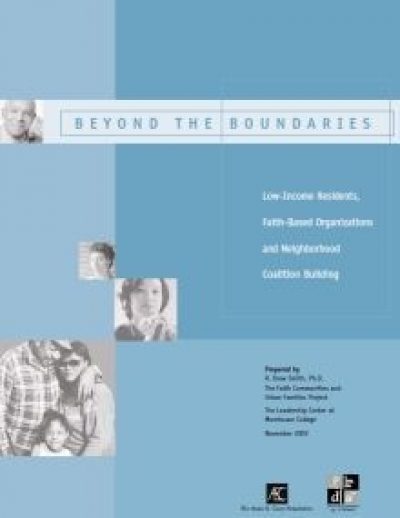 The Faith Communities and Urban Families Project, operated by the Leadership Center at Morehouse College, focused on four communities: Indianapolis, Denver, Camden and Hartford. The purpose of the project was to strengthen connections between low-income residents and faith-based organizations. This document summarizes the extent to which connections already existed between residents and faith-based organizations, what challenges surfaced during roundtable discussions and how the communities were able to move forward based on what they’d learned. The four communities studied for this project were also part of the Foundation's Making Connections initiative.

Although churches have a visible presence in most urban communities, they have had a limited impact on the poor living in inner-city neighborhoods. The survey data collected from the four project communities confirmed that few residents interacted with faith-based organizations during the previous year.

The surveys of 136 congregations across the four project communities found that, of the range of services that could be provided, inner-city congregations were most likely to offer recreational programs for children and teens, afterschool programs or prison ministries. Few offered programs such as emergency shelter or mental health services.

Need for Increased Interaction and Sensitivity

The two-day roundtable discussions with community leaders, clergy and residents in each community brought up many issues. Discussion participants learned there was a need for increased personal interaction, cultural sensitivity and conversation about the community.

There has been increasing governmental, philanthropic and scholarly interest in the social potential of churches, precisely because churches are one of the few social bridging institutions left in many of these economically depressed neighborhoods.

Neighborhood residents and churches don’t agree on all issues, but the roundtables helped them forge bonds. We just had never come together in one group to discuss these things. Instead, we’ve been individually taking action and not connecting.