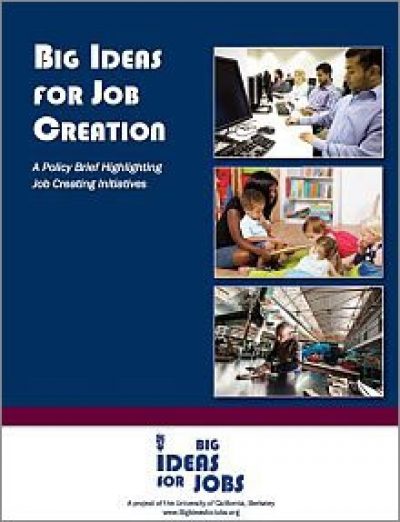 The nation's unemployment rate has turned stagnant, and it is unclear how to best address it.

Traditional fiscal and monetary policies enacted by the government are not working as expected. Partisan debate tends to make any new approach unlikely, leaving states and cities to step up and enact policies of their own if the unemployment crisis is to be addressed. This action must consider the unique position of a region's economy, and draw on more tools than the knee-jerk tax cuts and infrastructure investments.

This report highlights 13 ideas worthy of consideration and potential investment. They include low-cost, readily implementable programs that would create jobs accessible to low-skilled workers, and avoid gimmicks as well as wasteful incentive programs that simply lure jobs from one place to another.

Many of the tools and approaches have existed in the past but have not had overwhelming success. They would be more effective if more employers knew more about them.

Blanket policies from the federal government tend to overlook the intricacies of a region. Given the different industries that support jobs throughout the United states, a one-size-fits-all approach can't work.

Policies that encourage self-employment are predicted to yield the biggest return on jobs creation -- 500,000 jobs per $1 billion investment.

Weighing options must also look at the long-term stabilization possible. If an approach simply encourages an abbreviated spike, there is a risk of re-collapse as a policy or program expires.

Job losses since the beginning of the recession reflect an ongoing restructuring that has disproportionately affected the most disadvantaged populations, with losses concentrated in construction, manufacturing, retail and administrative and waste services.

Amid the chatter over the nation’s stagnant unemployment rate, one thing is clear: The need for job creation will remain in the headlines as long as 25 million Americans need full-time work. What is less clear is how best to create those jobs.