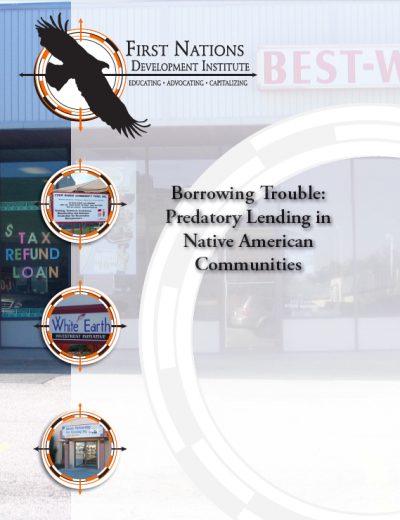 Predatory lending practices, which increased with the collapse of the subprime mortgage market, disproprortionately target Native American communities and other vulnerable populations. This report provides an overview of the predatory lending practices that have had a harmful impact on Native people and highlights the efforts of five Native Nations to fight this growing problem.

Across the United States, more than twice as many Native Americans as whites obtain home mortgages on the subprime market.

In 2005, the annualized interest rate for a rapid refund loan covering the average income tax refund was estimated at 178%; $100 in addition to the average $146 cost of tax preparation.

Nearly three out of four tribal housing professionals indicated that predatory lending was at least somewhat of a problem in their communities; more than one in three named loans against tax refunds and payday loans a big problem.

American Indians living on or near tribal lands have nearly as many payday lending choices as bank branch choices. This ready access has translated to predation and escalating debt for numerous Native consumers. One participant in a breakout session put this access and experience linkage succinctly: 'When people like me go to look for a loan, our only friends are the predatory lenders.'

Many of our clients come to us in extreme emergencies regarding foreclosure, utility cutoff, or repossession because nine times out of ten they have been making their predatory loan payments and foregoing essential payments — the predatory lenders are such aggressive collectors (and many times not ethical or legal) that families forgo making shelter, utility, and transportation payments just to satisfy the predatory lender.

We are very hopeful for the future because of steps we are taking now. We know that we are improving the financial situation of a number of our members, and figuring out some solutions to the overall barriers to homeownership. We also know that we are setting the stage for future generations to change destructive financial patterns.