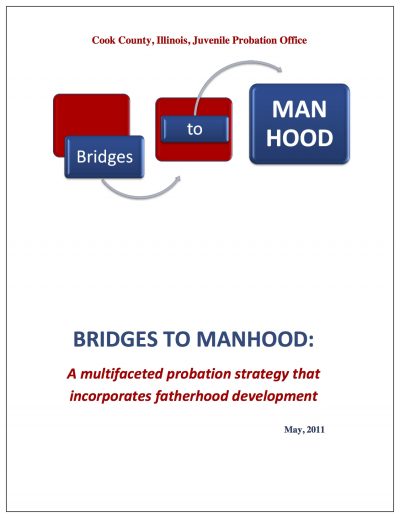 Breaking the family cycle of absentee fathers takes a concerted effort. Making the case for including fatherhood development within a probation intervention for young dads is easy because it works. It works to:​

After 5 years of testing and tweaking, Cook County is ready to show the world their successful probation/fatherhood model.

Children without fathers are at a disadvantage

Bridges to Manhood (BTM) participants were more than twice as likely to successfully complete probation over non-participants.

None of BTM participants surveyed went to jail while almost 25% of non-participants went down that path.

At first I rejected the class because I was involved in gang activity, then I learned the special role that I play in my child’s life. I gave up gang activity because that was time I could spend with my daughter.

we have known for decades that a father is a very important piece of a child’s development. What I did learn is that fatherhood is also a very valuable teachable moment that provides an opportunity to influence change in the lives of young men in the Juvenile Justice system.

During sentencing, the BTM program provides a viable avenue for young men who are fathers to become not just better fathers, but better men.