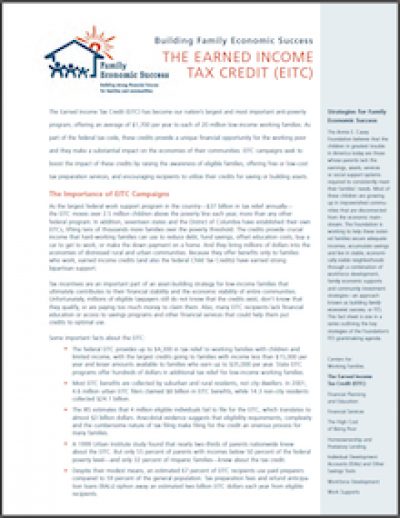 This report serves as a quick primer on the Earned Income Tax Credit — what it is and why it matters to America’s hardworking families. Readers will also learn about a Casey-led campaign that succeeded in boosting the credit’s profile while securing more than $310 million in tax relief for low-income households.  This document is one installment in a 10-part series, called Building Family Economic Success, that spotlights how the Annie E. Casey Foundation is helping to economically empower families across the country.

EITC campaigns have three general goals: 1) raise awareness about the credit; 2) offer free or low-cost tax preparation services; and 3) encourage recipients to use their credits for saving or building assets.

The federal EITC offers tax relief to working families earning $35,000 or less annually, with the largest credits of $4,300 going to families with incomes below the $15,000 mark.

Many Americans are unaware that the credits exist or that they qualify for tax relief. In fact, the Internal Revenue Service estimates that, each year, four million eligible individuals lose out on combined $3 billion in credits by failing to file for the EITC.

Too many low-income workers are paying too much to claim their credits. Each year, tax preparation fees and refund anticipation loans siphon roughly $2 billion EITC dollars from eligible recipients. In addition, families may lack the means or fiscal know-how to make the most of the credits upon receipt.

Bringing the EITC to the People

The Foundation offers ideas for boosting the reach and effectiveness of local EITC campaigns. These include: 1) conducting market research; 2) facilitating peer-to-peer exchanges; and 3) identifying best practices.

As the largest federal work support program in the country — $37 billion in tax relief annually — the EITC moves over 2.5 million children above the poverty line each year.

Because they offer benefits only to families who work, earned income credits have earned strong bipartisan support.