Building From Strength: Creating Opportunity in Greater Baltimore’s Next Economy

By the Brookings Institution 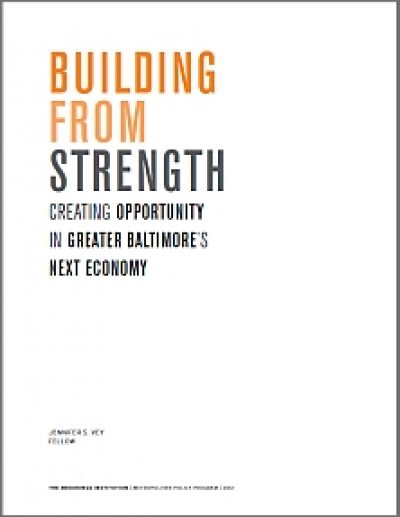 This report takes a hard and somewhat unique look at the disconnect between Baltimore beating the recession odds yet having its low-wage workforce expand. By citing findings from both empirical analyses and dozens of interviews, it make the case that efforts to increase economic opportunity must be rooted in efforts to create a more opportunity-rich regional economy and to help low-income residents connect to it.

There is a disconnect between the economically viable Baltimore region and the low-wage workforce that continues to grow as the chasm between rich and poor continues to widen.

The median household income for the Baltimore region was nearly $15,000 higher than for the country during the recession years.

A good economy for most does not create a better economy for all as the numbers of low income people in Baltimore have actually gone up.

62% of the job growth in Baltimore falls in the low-wage arena with just over 9% falling in the high-paying category.

If greater Baltimore and its peers truly want to increase economic opportunity, they must embrace a different framework for the “next economy,” one based not on greater domestic consumption—of real estate, retail, government, and health care, for example—but rather on exporting goods, services, and ideas to consumers both outside the region and abroad.

But Baltimore’s ability to grow the next economy is also hampered by its own acute lack of regional vision and coordination. in fact, nearly all of those interviewed for this report expressed a similar lament about what seems an inability (or disinclination) of state and metro area leaders—from all sectors—to unite around a set of regional goals.

Greater Baltimore has the institutional strength and organizational capacity to bring about the type of large-scale social and economic changes suggested in these pages, if it has the will to do so.