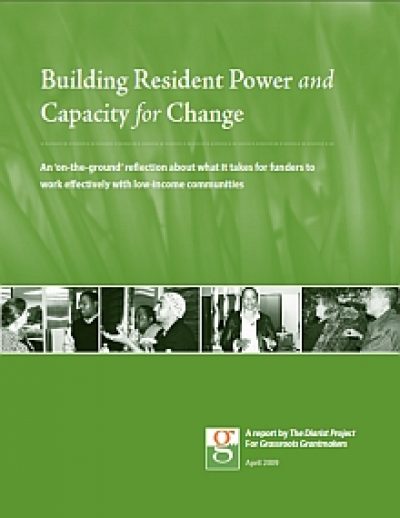 Grassroots Grantmakers is a learning network for funders working on community change in the United States and Canada. They convened 50 community organizers and activists to observe organizing efforts in two low-income neighborhoods in Chicago. This report details the infrastructure, investments, time and energy it takes for resident-led organizing to take root and contribute to broader social change efforts. The group found that changes supported by organized neighborhoods are sustainable because they are driven by those with the most at stake  -- the people who live, work and worship in the neighborhoods.

Funders need to have the right mindset to make lasting change in tough neighborhoods.

Funders should understand that the goal of supporting place-based community organizing is to build the neighborhood’s capacity to bring about change.

Foundations must build their own capacity to support grassroots organizing, as well as that of other funders and that of the broader philanthropic community to do this work.

New approaches are needed to measure the impact of effective community organizing, including how it can accelerate broader social change efforts.

Investing in individuals to create community change has to be measured differently than their investment in job training or other more quantifiable programs.

Our support for community organizing and small grants doesn’t always match up. If the small grants strategy is just to support resident-led projects, but those projects aren’t focused on systems change, what should a funder do? At what point does it stop looking like resident- led change and more about foundation-led change?

Funders keep asking organizations about their plans for getting into a broader movement and broader coalitions. But you can’t take it to the next level until that organization sees the connection between the community level and the federal level.