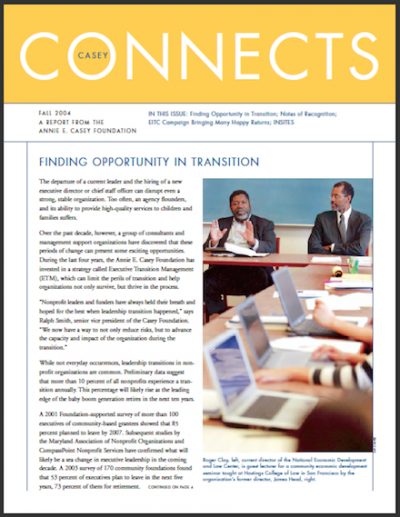 This issue of Casey Connects introduces the Foundation’s Executive Transition Management Initiative, which aims to help nonprofits flourish during a leadership change. A second story tells how Casey linked families in need to more than $225 million in tax credits in 2004.

Thanks to Casey, organizations are thriving — not just surviving — during a leadership transition

Leadership changes are common in nonprofit work. Data suggests that more than 10% of nonprofits experience a transition annually.

A survey of 170 community foundations found that 53% of executives planned to leave their post in the next five years. Among the leaders exiting, 73% had plans to retire.

Leadership change can be a powerful entry point for strengthening an organization.