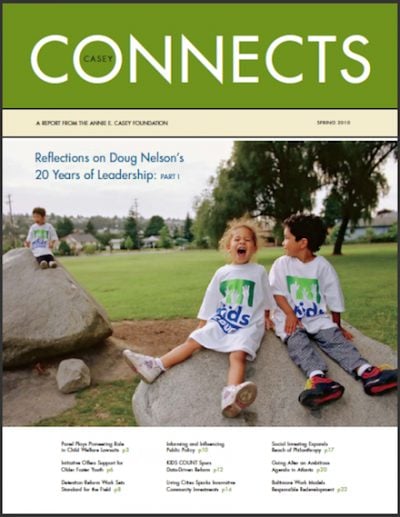 This issue of Casey Connects honors the two-decade tenure of Douglas W. Nelson, who retired as Annie E. Casey Foundation’s president and chief executive officer in April 2010. Readers will learn about Nelson’s key contributions in shaping both the Foundation and the nation’s perspective on serving vulnerable children and families.

Here’s to a legacy rich in ideas, innovation and results

A New Model for Reform

Casey’s Juvenile Detention Alternatives Initiative is now practiced in some 100 sites in 27 states and the District of Columbia.

Since opening in 2005, Atlanta’s Center for Working Families has facilitated nearly 950 job placements as of the date of this report.

Over the past 2 decades we have worked to build a good deal of knowledge and some hard evidence that things can change, that systems can improve, that markets can work differently. But we still need to get better, and smarter, and more critical in our analysis of data.

We knew from the beginning that this would be a long haul to convince residents that we’re in it with them, instead of against them or in spite of them. And I couldn’t think of a way to try to make that case seem more convincing and more sincere than by being personally involved and being in the neighborhood…