Shining a Light on Poverty — and Efforts to Combat It 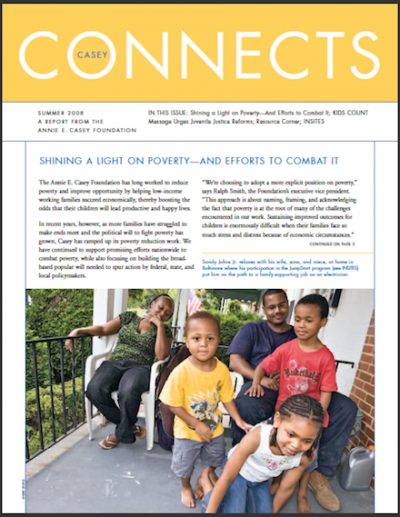 In 2007, 10 states enacted or expanded their state-level Earned Income Tax Credits, putting an extra $1 billion in the pockets of low-income working families over the next 5 years.

Baltimore is combating poverty with JumpStart, a 3-month program that offers under-employed residents a pathway to high-wage construction jobs.

Nearly 100,000 youth are confined in America’s juvenile justice facilities on any given night. More than 60% are there for a non-violent offense.

To counter the hopelessness and frustration that often undermine efforts to tackle the complex problem of poverty, Casey is spreading the word that there are known tools that can be and are being used to reduce poverty.

Sustaining improved outcomes for children is enormously difficult when their families face so much stress and distress because of economic circumstances.