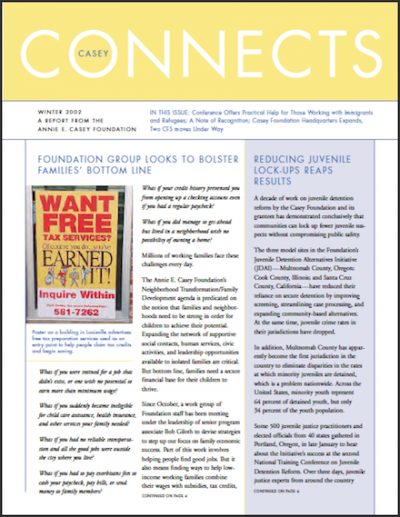 This issue of Casey Connects tells how the Foundation is ramping up efforts to help low-income families succeed. Smaller stories include a note of recognition page, a conference spotlight and a look at how one county in Oregon is making fairer detention decisions in the wake of Casey-led juvenile justice reforms.

The bottom line? Families need a secure financial base for their children to thrive

In 1994, minority juveniles in Oregon’s Multnomah County were 31% more likely to be detained than white juveniles. In 2000, this difference vanished — and detention rates dropped for all youth.

In America, one in five residents are either foreign-born or first generation, according to census data, meaning the need for immigrant- and refugee-focused services is growing.

Casey celebrates four movers and shakers, including a nonprofit that has helped clean up 500 vacant lots and build 600 new residences in one of Boston’s poorest neighborhoods.

By reducing its reliance on detention, Multnomah County was able to mothball three 16-bed detention units and divert roughly $2 million a year to other needed services.

The Casey Foundation’s idea is to make free tax preparation sites the fulcrum of activities to help the working poor, since these services can help people get a cash windfall in the form of tax refunds.