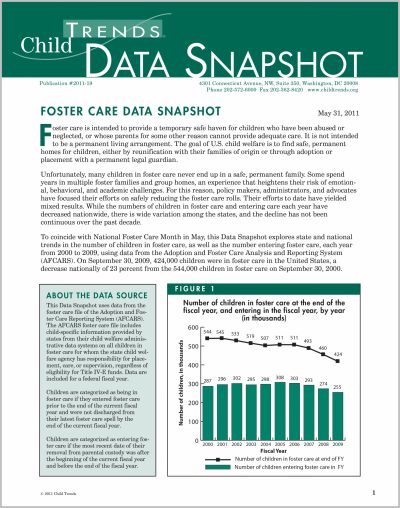 The goal of U.S. child welfare is to find safe, permanent homes for children, but many children in foster care never attain a permanent family. Children spend years in foster programs and are at greater risk for developing emotional, behavioral and academic challenges. The number of children in foster care decreased over the past few years, but the decline is not steady and carries mixed results.

Maine Out in Front

Maine had the largest decline, with its foster care population dropping by 48.4%.

Nevada had the largest increase, with its foster care population growing by 195%.

Although one might expect that the numbers of children needing foster care might be approximately uniform (after controlling for population) across states, the data presented in this snapshot document wide variation in terms of entries and placements from state to state. The reasons for these differences are complex, but can partially be explained by the wide variation in state foster care systems with respect to their funding structures, policies and practices.

Foster care is an important safety net for somechildren who cannot remain safely at homebecause of abuse or neglect.