By the Annie E. Casey Foundation, the Urban Institute and the John D. and Catherine T. MacArthur Foundation 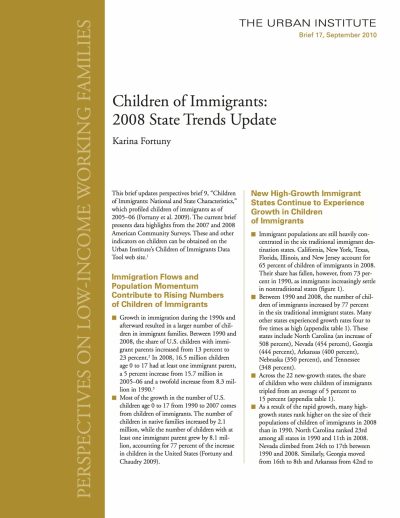 There are more Immigrant Children in Poverty

Nationally, 56% of children of immigrants are Hispanic.

More than half of children of immigrants nationally have one or two English Language Learner parents.

Growth in immigration during the 1990s and afterward resulted in a larger number of children in immigrant families. Between 1990 and 2008, the share of U.S. children with immigrant parents increased from 13% to 23%.

Immigrant populations are still heavily concentrated in the six traditional immigrant destination states. California, New York, Texas, Florida, Illinois, and New Jersey account for 65% of children of immigrants in 2008. Their share has fallen, however, from 73% in 1990, as immigrants increasingly settle in nontraditional states.