Collaboration and Leadership in Juvenile Detention 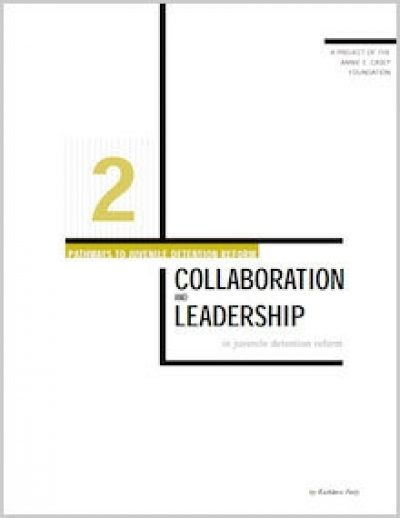 This report, the second installment in a series devoted to revolutionizing detention programs and practices in America, highlights two basic — yet vital — components for advancing complex reform: Leadership and teamwork. Readers will learn exactly what it takes (coordination! small victories! committees!) to pull players from all corners of the juvenile justice landscape and have them step in sync toward one noble focus—creating a safer, fairer detention system for today’s youth.

Introducing a three-part roadmap for reform

Ode to the Quick Fix

Experts share four quick tips for sustaining collaboration in juvenile detention reform. At the top of the list: Light an initial spark with small wins. Select tasks that can be done quickly and frequently to illustrate the benefits — and the promise — of working together.

This report breaks down, by position title, who served on the collaborative at three different JDAI sites. It also lists what subcommittees each of these sites created to help tackle specific issues once their reform efforts kicked into gear.

Leaders can reinforce the collaborative’s role — and ensure that their reform efforts stick — by making the changes official. This means rewriting procedures, policies, job descriptions and training modules to reflect the new and improved system.

Leaders will learn about four common challenges that they may face while championing complex reforms. Example: Defense attorneys may feel that their participation in the collaborative violates their sworn vow to protect children. The group must not shy away from addressing — and then resolving — this concern, as defense attorneys are critical to the reform effort’s success.

Fact: No JDAI site succeeded without the leadership of the presiding juvenile court judge.

Leadership is critical — some would argue, the single most important element — in determining the success or failure of a collaborative reform effort.

It is important to begin with a few simple challenges, prove they can be overcome, and then move on to the bigger ones.