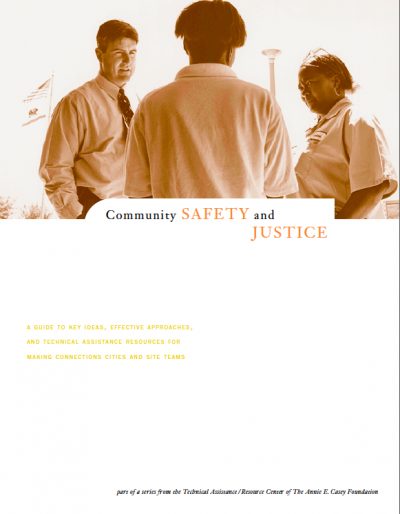 From 1985-95, the juvenile detention rate for white youth dropped by 13%, while increasing by 180% for African-American youth and 140% for Hispanic youth during the same period.

In 1995, roughly 5.5 million adults residents of the U.S.--2.8% of all adults--were under correctional supervision; of those, 70% were on probation or parole.

In 1994, four cities accounted for 30% of all juvenile homicide arrests in the U.S., even though they are home to just 5% of the nation's youth.

Three times as many youth--ages 12-17--were victimized by violence than adults in 1994.

These discoveries underscore the fact that we have built an enormous, hard-to-understand, often hostile system of justice and safety (at least from the perspective of residents in poor communities) that is misdesigned to solve the problems it is charged to address.

Fortunately, trends and experiments are under way that give reason to hope that such innovations are possible. A movement toward community justice has emerged among the formal system’s agencies, starting with community policing and now extending to prosecutors, probation and the courts. These innovations are based on two essential changes in bureaucratic behavior: active consultation with residents regarding problems and solutions and the decentralization of service delivery.