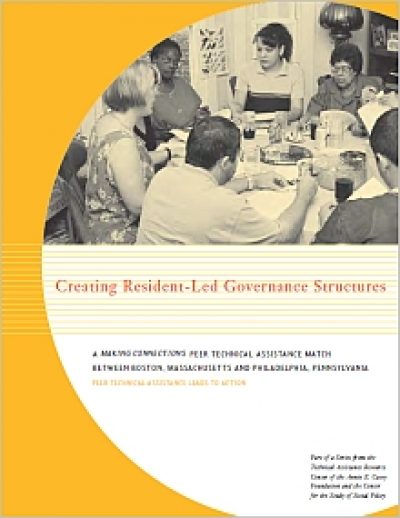 In 2001, Boston’s Mattapan Community Partnership sought help from Philadelphia‘s Germantown Settlement in launching a Community Ambassadors Program. The exchange centered on the development of the Germantown Settlement’s Community Collaboration Board, a 47-member, resident-led governing board that oversees the Settlement’s work. This report describes the exchange and lessons learned by Germantown Settlement. It includes the importance of board elections, resident leadership skills, youth involvement, organizational development and neighborhood capacity to develop a shared agenda, use data and raise funds. The peer match was arranged by Casey’s Making Connections Technical Assistance Resource Center when the Foundation’s initiative was in full swing.

It takes time and transparency to create a community governing board with resident leadership.

A clear agenda with the support of the community helps assure that resident leadership development, youth involvement and collaborative decision-making are connected to tangible community goals.

When devising an approach to resident leadership training, Germantown Settlement was guided by the premise that training had to be an integral, ongoing part of the community-building process rather than a discreet activity that takes place on the fringes. Secondly, the agency was clear about its intent to build the capacities of residents to “govern” a neighborhood initiative rather than allow people to be satisfied with “just sitting in a room when decisions get made.”

Community organizing has to transcend short-term goals. While special events help bring people together and allow them to see a neighborhood as it should be—not just the way it is—organizing demands more of community leaders than coming out with turkeys on a holiday. Local leaders have to give 100 percent every day because people will judge them for what they do, not what they say.