Data on Children in Foster Care From the Census Bureau 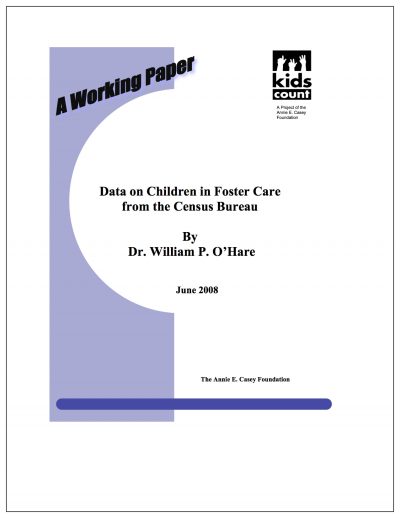 This paper provides the first systematic examination of data collected by the U.S. Census Bureau on children in foster care. This data stands as an important source of information on a large segment of the foster child population and the households where they live.

The 2000 census was the first decennial census in the United States to identify children in foster care, and the American Community Survey (ACS) has collected data on foster children each year since 2000.

The document opens by examining the question used to identify foster children in the decennial census as well as the American Community Survey. It notes that Census Bureau surveys, when checked against administrative records, only identify about half of the number of children shown to be in foster care. The surveys do a better job of capturing children living in non-kinship family foster care while missing kids living in kinship care, institutional and group arrangements, the paper suggests.

Aging Out and Arrests

Presence on the Census

Foster children are under-identified in the Census, in part, due their brevity in the system -- in 2005, about 96,000 children exited foster care in less than 5 months, and almost 50,000 exited in less than one month.

The Census Doesn't Cover It

Several aspects in the structure of the 2000 Census contributed to an inherent under-count of foster children.

The lower average income of households with foster children can be traced to lower educational attainment and less involvement in the paid labor force.

Overall, the existing research suggests that children in foster care have more compromised developmental outcomes than children who do not experience placement in foster care. Young people in the nation’s troubled foster-care system are all too accustomed to inattention and indignities from bureaucracies that are supposed to be caring for them.

The administrative data on children in foster care focus heavily on their experience in the child welfare system, but have very little information on socio-demographic status or living arrangements. And provide almost nothing about the characteristics of foster parents or foster homes.