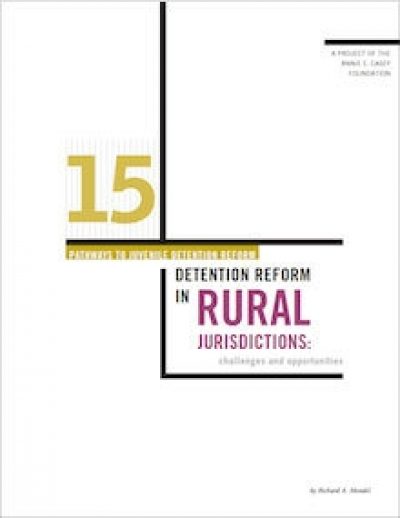 This report—the 15th installment in a series devoted to revolutionizing detention programs and practices in America—gives rural areas an expanded toolkit for overcoming the unique challenges associated with juvenile detention reform.

The bad news? Rural communities must overcome a long list of obstacles when aiming for detention reform.

With the deck seemingly stacked against them, rural communities have a few key cards up their sleeves. They’re creative, agile, resourceful and—contrary to their static and sleepy stereotypes—they’re willing to change the status quo.

2. Seek state-level support. State governments can stimulate reform by offering leadership, flexible funding and financial incentives to promote innovation, efficiency and the use of detention alternatives;

3. Adopt a 3-step strategy. First, ensure that you can monitor and supervise youths as needed. Next, utilize existing programs and facilities for children. Third, invest in solutions that speed up juvenile case processing.

10 counties in Oregon committed to JDAI reform—and with resounding success. Some of their many innovative solutions include: 1. Creating a family resource model, which placed youth in pre-screened family homes when shelter options were scarce; 2. Launching a Girls Circle to offer specialized counseling aimed at reducing rates of probation violations among girls; 3. Utilizing videoconferencing technologies to facilitate psychiatric consultations for youth in far-flung areas.

Rural youths are more likely to be poor and have a limited education relative to their city-dwelling counterparts. They are also more likely to abuse alcohol and other drugs and be both unemployed and school dropouts. Yet, despite their remarkably different backdrops, rural and urban youths suffer the same emotional and behavioral problems—and they cross paths with the juvenile justice system at similar rates.

The need for detention reform does not end at the city line.

Of the 50 U.S. counties with the highest poverty rates, 48 are located in rural America.

The evidence is clear that rural communities can succeed in detention reform.