Disparities and Disproportionality in Child Welfare

Analysis of the Research 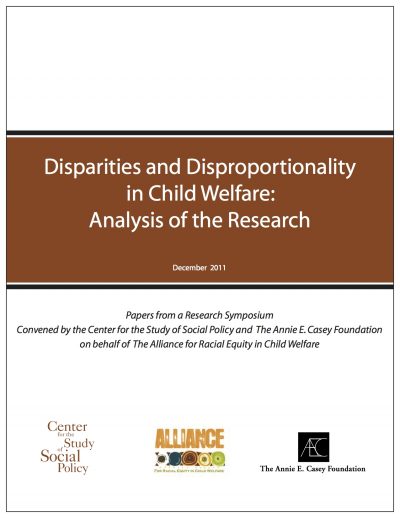 The project called for a compilation and analysis of research related to racial and ethnic disproportionality and disparities in child welfare, primarily focusing on research published since the synthesis by Robert Hill in 2006.

In all, over 200 sources were included in the review and over 400 were considered. The review addressed research on child welfare decision-making stages. It describes the main explanatory frameworks that have been formulated for racial disparities in child welfare and includes associated research findings. It also extends to a broader examination of research that explores the role of race as child welfare interacts with other systems of service provision.

How do we decrypt what is happening in the child welfare system?

Identification of disparities may be the first step in identifying possible discrimination.

Racial and ethnic groups are not uniformly overrepresented or underrepresented in the current child welfare landscape. Historically and geographically, there are variations that are evident.

Poverty as a Cause

The underlying roots of racial disproportionality and disparity are complex and often coexist. This review’s focus is on four main explanations: 1) disproportionate and disparate need of children and families of color; 2) racial bias and discrimination in the child welfare system and other ecologies; 3) child welfare system processes and resources; and 4) geographic context (i.e., region of country, region of state, urbanicity and/or neighborhood characteristics).

Poverty has had a persistently strong relation to minority status in the United States. Correlated social indicators such as unemployment, homelessness, mental illness, criminality, violence, and substance abuse make children and families of color more vulnerable.

Differential treatment by race may be external or internal to the child welfare agency or both. For example, inequitable practices by outside agents might interact with the child welfare system (e.g., hospitals, law enforcement, education, etc.). Likewise, culture and policy within an agency may lead to inequitable treatment of families of color.

Research suggests that there is a broad pattern of inequitable resources available to families of color in the child welfare system, such as housing, counseling and child care services.

Studies have confirmed that racial disproportionality exists across the nation, and that magnitude and types of disparity, as well as the population for which the disparities exist, are unique to the geographic location.

Research and practice suggests that racial disproportionality and disparity in the child welfare system may be explained by all the aforementioned theories.

Some argue that the disproportionate removal of children of color from their families is not necessarily indicative of bad or biased practice (as some claim), but could reflect fair, accurate and safe decision making on the part of the child welfare caseworker or judge.

At this point, research in the area of disparities in child welfare is not capable of identifying why these disparities exist, but it does point to several causal links. More than offering a reason why, this research invalidates several assertions and opens the door for more in-depth research.