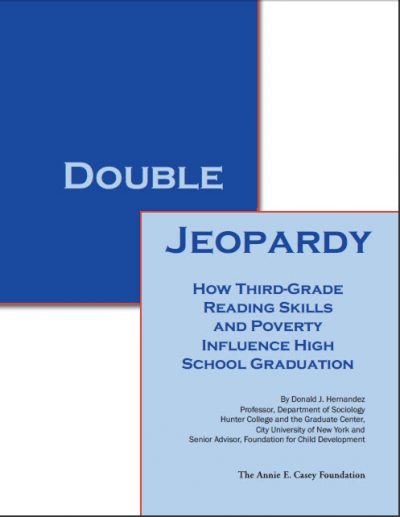 Graduation rates are dramatically impacted by:

Policy and program strategies must be enacted in three arenas: schools, families and legislation on the federal, state and local levels.

About 16% of children who are not reading proficiently by the end of third grade do not graduate from high school on time -- a rate four times greater than that for proficient readers.

Children whose families live in poverty are usually deprived of early education and are more likely to attend low-performing schools.

The National Assessment of Educational Progress (NAEP), also known as "The Nation's Report Card" showed in 2011 that only 34% of fourth graders read at a "proficient" level, while the rest read at either a "basic" level (33%) or below basic (33%).

President Obama has also called for restoring the United States to its position as number one in percentage of college graduates. (It is now tied for 9th.)

One in six children who are not reading proficiently in third grade fail to graduate from high school on time, four times the rate for children with proficient third-grade reading skills.

Children who have lived in poverty and are not reading proficiently in third grade are about three times more likely to dropout or fail to graduate from high school than those who have never been poor.