Eliminate Confinement as a Response to Probation Rule Violations 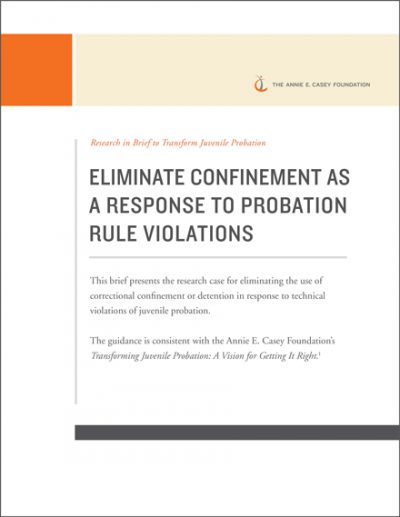 In This Brief on Eliminating Confinement, You'll Learn

This brief zeroes in on a troublesome juvenile justice practice: the use of correctional confinement for youth who have violated the conditions of their probation — but not the law.

The document explores how confinement causes serious harm to youth but does not reduce future offending. It also examines how the heavy use of confinement for technical violations exacerbates racial and ethnic disparities while also running counter to the lessons of adolescent brain science.

The guidance in this brief is consistent with Casey’s Transforming Juvenile Probation report.

Young people — and too often youth of color — are being locked up for breaking the rules, not breaking the law

In 2017, youth of color represented 64% of young people held in residential custody for technical violations — far higher than their share of the nation’s total youth population (46%) or their share of all juvenile probation dispositions nationwide (55%).

Research shows that, in the long term, youth who spend time in custody compared to their peers who have never been confined are less likely to complete high school, less likely to find employment and more likely to suffer mental health problems.

Youth on probation are typically required to adhere to long lists of standard rules and conditions that are often unrelated to their individual needs and circumstances. Given the incomplete development of adolescent brains, imposing so many rules on adolescents makes little sense, especially when failure to comply can lead to confinement.

An increasing body of evidence shows that youth respond far more readily to rewards for achieving positive behavior than to the threat of sanctions for bad behavior.

A carefully controlled multiyear study involving 35,000 young people in the Chicago area found that being confined as a juvenile led to a 22% increase in the future odds of being incarcerated as an adult.