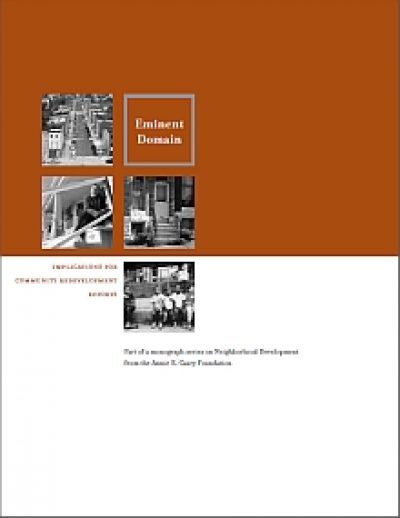 Eminent domain is the power of government to condemn and take private property for public use. Because it plays a major role in urban blight renovation, it most often affects poor families of color. In 2006, the Casey Foundation’s Neighborhood Development unit convened people on both sides of the eminent domain issue to see how this tool could be used to support rather than displace families. The discussion produced a set of guiding principles for the responsible use of eminent domain outlined in this report.

Economically thriving cities like New York, Chicago and Los Angeles had a different take on eminent domain than struggling cities like Syracuse, Rochester and Cleveland.

The prevailing paradigm of urban renewal through urban redevelopment used eminent domain as a major means of acquiring and assembling projects for blight removal rather than for improving conditions and expanding opportunities for the children and families who live in these communities and are usually impacted by community redevelopment efforts.

There needs to be greater discussion about the meaning of “public purpose.” The use of eminent domain may not be as divisive as it seems. It can be a fundamental building block if used appropriately, but the way the issue is framed can create unnecessary divisions.