Demonstrating that Jurisdictions can Respond to Delinquent Behavior in ways that are More Effective,Fairer, Safer and Less Costly 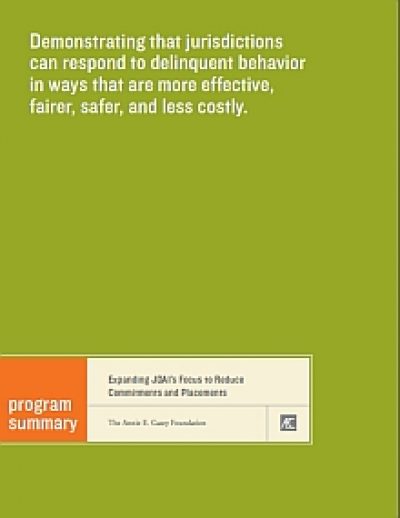 Casey's Juvenile Detention Alternatives Initiative (JDAI) proved that locking up kids is dangerous, ineffective, unnecessary, obsolete, wasteful and inadequate. Casey believes that current trends in reducing juveniles behind bars can be helpful in keeping these kids in their own homes instead of being housed elsewhere. And that trend will translate into fairer, safer, cheaper and more effective delinquent behavior alternatives. Read about Casey's plan for in-depth juvenile justice reform.

JDAI and "narrowing the pipeline"

Research has clearly shown that treatment is more effective than punishment when it comes to redirecting youth and avoiding future criminality.

This history of abuse and scandal is so chronic as to raise the question of whether these institutions can be operated in a safe, healthy (much less rehabilitative) manner.

Studies show that rearrest rates of 75% are common three years after release from juvenile corrections.

The challenge of safely reducing youth incarceration should not be underestimated, but the foundation laid by detention reform efforts in JDAI sites and recent policy reforms in several states provide strong starting points.

Virtually no juvenile justice systems today hold themselves accountable for whether the kids they serve are any better off, in the long term, as a result of system intervention (or lack thereof). For example, are these youth educated, employed, or healthy? Recent research implies that the well being of youth, generally, would be improved if the juvenile justice system reduced the harm it sometimes does, like unnecessarily placing kids in dangerous facilities.