By the Urban Institute, The Annie E. Casey Foundation 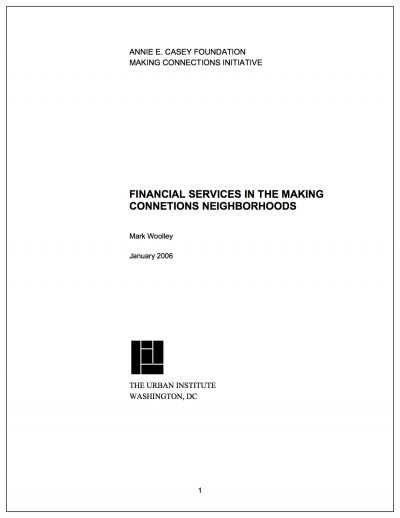 This report analyzes survey data about the use of financial services by families living in the 10 Making Connections cities across the United States. The report evaluates resident responses by their use of bank services, check cashing services, payday lenders, pawn shops and credit cards, as well as how they would respond to financial emergencies. It correlates how factors such as race/ethnicity, immigrant status, income, employment level, and neighborhood of residence influenced the use of financial services.

Making Connections neighborhood families who experienced part-time employment or unemployment were more likely to rely on family and friends to deal with financial emergencies than families who had full time jobs.

Neither residents nor families with full-time employment were likely to use pawn shops or payday lenders to deal with a financial emergency.

Income level is the single strongest predictor of household bank use.

Access to low-cost financial services is an integral part of a community’s financialsecurity and ability to weather emergencies. Savings and checking accounts, low orzero-cost paycheck cashing, and access to short-term credit all provide the means forindividuals and families to save for the future and protect themselves against risks and unforeseen emergencies.