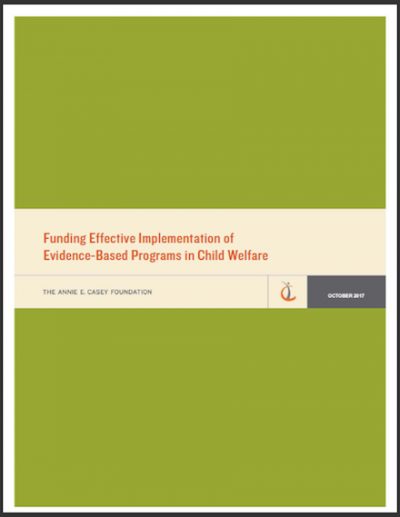 This brief shares eight strategies to help child welfare agency administrators and partners fund and sustain evidence-based programs that benefit children and families. These strategies — presented in the context of a stage-based framework — consider the costs, funding streams, partnerships and allocation of resources that are both specific to child welfare systems and necessary for effective implementation. Readers will also gain insights from agency leaders interviewed in nine jurisdictions across the United States, where evidence-based programs have been successfully implemented and sustained. These interviews reveal real-world challenges and the methods that the leaders used to address these challenges.

Funding for evidence-based programs has a variety of streams and can often be accomplished by reallocating existing resources.

Research has shown that how evidence-based programs are implemented is critically important, and that replications that do not follow the intended design are less likely to achieve the outcomes realized in the original evaluations.

The commitment to accountability for outcomes creates an environment of investing in results rather than services, and lays the foundation for the successful, data-driven resourcing of evidence-based programs.