The Growth of Debt Among Young Americans 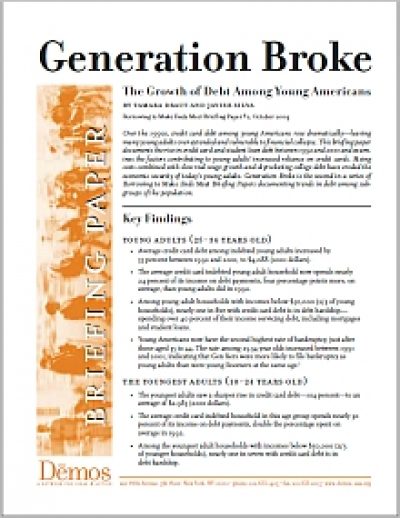 Many factors, including deregulation of the credit card industry, contributed to young Americans being deeply in debt.

Young Americans had the second highest rate of bankruptcy, just after those aged 35 to 44, at the time of this report.

Gen Xers were more likely to file bankruptcy as young adults than were Baby Boomers at the same age.

Nearly 7 out of 10 young Americans aged 25 to 34 have one or more credit cards, a level basically unchanged since 1992.

The earnings of 25 to 34 year olds have not kept up with inflation or the costs of basic necessities including housing, healthcare and student loan repayment obligations.

But there are unique economic circumstances that may contribute to young adults’ greater reliance on credit cards to make ends meet. Young adults are often still servicing student loan debt, have higher unemployment rates and earn lower, entry-level wages. Likewise, today’s young adults have come of financial age during an era of banking deregulation that has dramatically increased the availability and cost of credit.

This generation is also the first to shoulder the costs of their college primarily through interest-bearing loans rather than grants. Most of the 25 to 34 year olds in the 2001 sample went to college in the 1990s—when college costs increased by an average of 38 percent, borrowing became more common among students and the amount borrowed grew rapidly.