Growing Up in North America

Child Health and Safety in Canada, the United States and Mexico 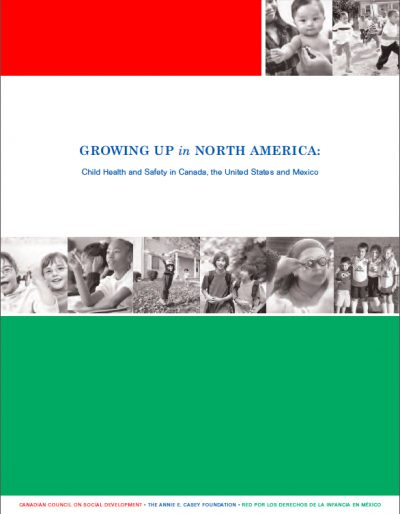 Children represent more than 25% of the population of North America. Yet not enough is being done to document and study the status of children in Canada, Mexico and the United States in order to inform decisions that support the healthy development of children, who represent the future prosperity of these nations. This report documents the health status of North American children across several key indicators, highlights similarities and disparities by geography, ethnic and socioeconomic status and examines the challenges facing youth across the continent.

Infant mortality has declined sharply across North America since 1970, though in Canada and the U.S. there has been little change since 1998.

Unintentional injuries are the leading cause of death of children and youth, ages 1-24, across all three countries and all age groups. Car accidents account for 40% of unintended injury deaths of children ages 5-14 in North America.

The teen birth rate in all three countries has declined over the last two decades: the U.S. saw a 33% decrease, Canada's rate dropped by 48%, and Mexico's by 7%.

The percentage of children who are overweight or obese across the continent is between 26 and 30%; the childhood obesity/overweight rate in the U.S. and Canada has doubled since 1980.

Mental health issues are a serious concern in North America; suicide is the second leading cause of teenage death in Canada and Mexico, and third in the U.S.

In North America, access to health care varies among and within countries. When children and families have unequal access to health care, the consequences can be significant in terms of health outcome inequalities and life prospects. For example, children who do not have access to vaccines for preventable illness may die, and children suffering from developmental disabilities who do not have timely diagnosis and referral may not develop to their potential. Some families deal with ongoing struggles to obtain the supports that are critical for their children’s development.

The nations of North America have the opportunity—and obligation—to work collectively to solve these shared health problems and to learn from each other to improve the health of the children in each country. If the children of North America are to live to their fullest potential, they must enjoy good health. Furthermore, this is their right.