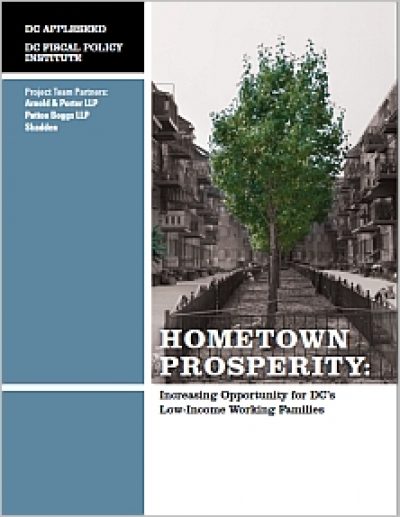 The benefits of Washington, DC’s growing economic prosperity have bypassed the District’s working poor families. This fact-filled report examines why the District’s economic recovery has eluded many residents and what can be done about it. Several strategic goals and their ongoing policies and activities are presented with specific policy recommendations designed to bolster working poor families.

Nearly one in three working families in the District was poor in 2005, with nearly two-thirds of these families headed by single women.

63% of DC jobs accessible to workers with high school diplomas go to Virginia and Maryland residents.

A higher proportion of working families in the District are poor than in neighboring states and the nation as a whole.

The District’s black unemployment is 5 times higher than white unemployment, the widest gap in the last 20 years.

The rich-poor gap is wider in Washington, DC than in any other large U.S. city, except Atlanta and Tampa.

This report is intended to focus on the circumstances of working poor families in the District — adults who are working and caring for children but earning less than 200 percent of the federal poverty threshold. This is a group often overlooked…

It is a common perception that poor families in the District are not working families. The reality, however, is quite different.

Indeed, investing in the District’s working adults is likely to be as important to the city’s future as the current efforts to rebuild the DC Public Schools.