Housing as a Platform for Formerly Incarcerated Persons

By Urban Institute, What Works Collaborative 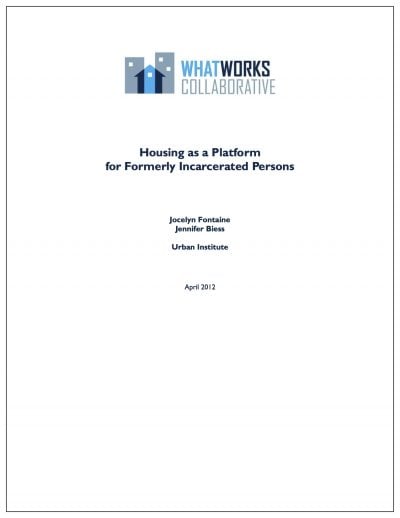 Re-entering society after being locked up is tough, not only for the former prisoners, but for the families trying to help. This paper contends that housing, as an immediate need and long-term solution, may play a role in creating successful re-entry and reintegration into the community for the newly released, but more research is needed.

The difficulties of re-entry

An estimated 9 million people are released from local jails every year.

Between 40% and 50% will return to jail within three years of release.

People coming out of prison are more likely to have mental and physical health issues, low educational attainment, poor work histories and higher rates of substance abuse than the general population.

Reducing the number or rate of returns to incarceration is critical. In addition, successful reentry and reintegration encompasses more than reductions in reoffending and reincarceration; it includes changes in individual behaviors associated with reoffending and reincarceration, such as reductions in substance abuse and other risky behaviors, increased family functioning and social support, educational attainment, gainful employment opportunities and wages, and participation in prosocial activities, such as community groups, faith activities, and volunteer or recreational groups.

Given the extensive public safety, social, and fiscal consequences associated with reentry, additional research is needed to understand how individuals can increase their chances of successful reentry and reintegration as they are released from prison and jail. Rigorous research should then lead to informed, evidence-based policy and practice.