By the Annie E. Casey Foundation, 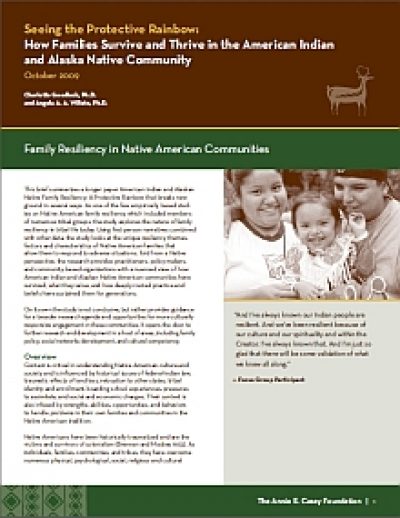 This brief summarizes a longer paper, American Indian and Alaskan Native Family Resiliency: A Protective Rainbow. The study looks at unique resiliency themes, factors and characteristics that have allowed these peoples to thrive through social and political persecution. The stories show how family strengths support the well-being of individuals, families and, as a result, the community in general.

Keeping ones’ cultural heritage is vital as a resilient protective factor.

Native Americans have been historically traumatized and are the victims and survivors of colonialism.

The stories of Native people are part of an unending pattern of earth, sky and air.

Told from a Native perspective, the research provides practitioners, policy makers, and community-based organizations with a nuanced view of how American Indian and Alaskan Native American communities have survived, what they value, and how deeply rooted practice and beliefs have sustained them for generations.

Context is critical in understanding Native American culture and society and is influenced by historical issues of federal-Indian law,traumatic effects of land loss, relocation to other states, tribal identity and enrollment, boarding school experiences, pressures to assimilate, and social and economic changes.