If Parents Don’t Speak English Well, Will Their Kids Get Locked Up?

By VERA Institute of Justice 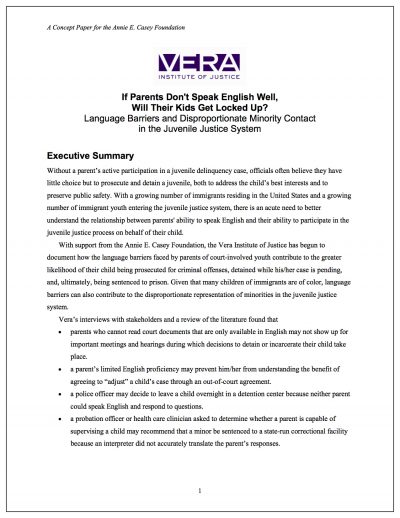 Language barriers are making it difficult for immigrant parents to advocate for their children during juvenile delinquency cases. But just how to remedy the situation needs more research. With support from Casey, the Vera Institute of Justice is studying the relationship between parents' ability to speak English, their ability to participate in the juvenile justice process and the likelihood of immigrant child being prosecuted for criminal offenses.

Although black youth comprise only 15% of the juvenile population, they make up 26% of juvenile arrests, 44% of the detained population and 58% of youth placed in state correctional facilities.

Nearly 10% of the U.S. adult population cannot speak English or do not speak it well.

In 2004, kids of color made up 25% of the total number of youth under 18 in New York, outside New York City, but they accounted for nearly 70% of all juvenile delinquent lock-up admissions.

Although there is probably no deliberate, knowing racism in the majority of cases, young people of color are represented in juvenile justice systems in numbers that cannot be accounted for by law violations alone.

Without a parent’s active participation in a juvenile delinquency case, officials often believe they have little choice but to prosecute and detain a juvenile, both to address the child’s best interests and to preserve public safety.