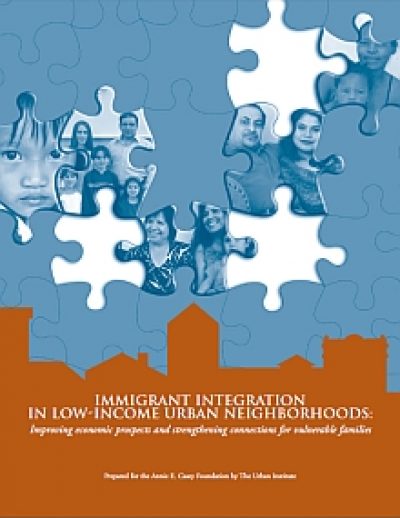 This report concludes that immigrant groups can close economic gaps between them and native-born populations with reliable, trustable access to education, transportation, English language acquisition and citizenship. It is part of a series produced by the Urban Institute based on neighborhood-level surveys of residents living in the Foundation’s Making Connections initiative sites

A lack of education could hold immigrants back economically

Foreign-born respondents living in the Making Connections neighborhoods were somewhat more likely to be employed than those in native-born households, according to survey results.

According to the survey, Mexican and Central Americans in the Making Connections neighborhoods were less likely to have a driver’s license and access to a reliable car than were other immigrant groups surveyed. They were, however, more likely to have one when compared to U.S.-born black survey respondents.

The survey found that poor families with kids living in the Making Connections neighborhoods faced higher rates of poverty and hunger than those without kids, regardless of whether they were born in the United States or not.

About half of both immigrants and native-born respondents had savings accounts in 2002-04, according to survey results.

The two largest groups of immigrants in the target neighborhoods — Mexican/Central Americans and Southeast Asians — have relatively high rates of poverty and economic hardship, along with generally low levels of advancement and integration on most but not all measures.

Southeast Asian immigrants mostly came into the country as refugees, received substantial integration services after entry, and have a high rate of citizenship. They fare far better on measures of economic advancement and integration than comparable groups given their very low levels of educational attainment and English proficiency.

By contrast, most Mexican and Central American immigrants are not citizens and many are likely to be unauthorized — although we could not measure this directly in the survey data. They are generally barred from public benefits, ineligible for citizenship and subject potentially to arrest and deportation.

….community interventions should be designed to build on the strengths of existing provider networks — including those for refugees, other immigrant populations and native-born populations — to extend services to all needy neighborhood residents.