By the Annie E. Casey Foundation and First Focus 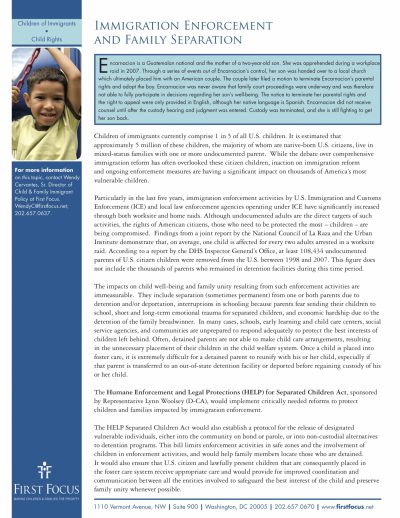 Children of immigrants comprise 1 in 5 of all U.S. children. This one-page brief examines the impact of enforcement raids on immigrant children and their families, from traumatic separations to economic hardship.

On average, one child is affected for every two adults arrested in a worksite raid.

In many cases, schools, early learning and child care centers, social service agencies, and communities are unprepared to respond adequately to protect the best interests of children left behind.

According to a report by the DHS Inspector General’s Office, at least 108,434 undocumented parents of U.S. citizen children were removed from the U.S. between 1998 and 2007.