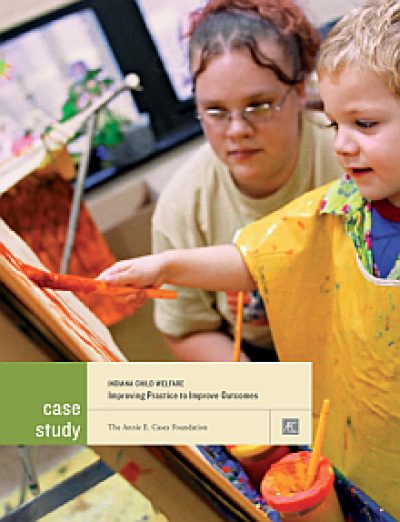 Indiana’s previous child welfare system was gaining attention for all the wrong reasons, including its penchant for pulling children from their homes. Cue new leadership and a new partnership with the Annie E. Casey Foundation, which championed a dramatic rebuilding of the state’s child services system and introduced its caseworkers to a radical new concept: Work with families—not against them.

Indiana and the Foundation forged a new practice model aimed at preventing the need to pull children out of their homes.

Indiana’s new system requires employees to have at least a bachelor’s degree and 12 weeks of training before they are allowed to handle a case on their own.

In 2009, legislation unified 92 separate child welfare offices by moving funding for staffing and services from the local to the state level.

Before Casey's help, Indiana was at or near the bottom in virtually every category of child services performance measures. Today, the state ranks 10th in reunification, 2nd in timeliness of adoption, 3rd in permanency and 11th in placement stability.

The facts were clear in Indiana: There were too many children in the system and more pouring in every week, with no plan or sense of urgency for slowing the flow of kids into state custody, nor any focus on affecting the safe, methodical exit of children to permanence.

Besides focusing on building a more collaborative relationship with families, providers, the courts and other key community players, the new practice model also centered on doing rapid and solid up-front assessments.